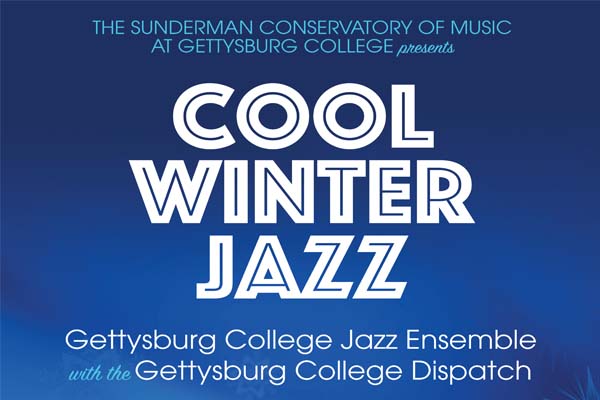 The Gettysburg Jazz Ensemble is back in action with its “Cool Winter Jazz” concert on February 28th! Featuring a variety of tunes from the swing era to the more contemporary jazz genre, the ensemble will also pay tribute to the late, great jazz trumpeter Roy Hargrove.

The Jazz Ensemble, led by Paul Carr, is a popular ensemble for students across campus. 16-19 students are selected by audition to study myriad styles of jazz encompassing swing, Latin, fusion, bop, and the American Songbook.

The band toured Europe in 1993, 1997, 2002, 2008, and 2015 with performances in Istanbul, Perugia, and in towns on the French Riveria. On previous tours, the ensemble performed in Montreux, Vienné, Amsterdam, Paris, Bruges, Heidelberd, Athens, and Venice. The GCJE has opened for Ray Brown and Phil Woods and performed with world-renowned soloists Carmen Bradford, Delfeayo Marsalis, Paquito D’Rivera, Boston Brass, Denis DiBlasio, Lew Soloff, Graham Breedlove, and Chris Brubeck. The ensemble was honored to perform at the 2011 MENC Eastern Division Conference in Baltimore. This is the first music ensemble in the history of Gettysburg College to be afforded this opportunity.

Tickets:  $5.00 for adults; FREE for children 18 and under and those with a Gettysburg College ID. All patrons must have a ticket.