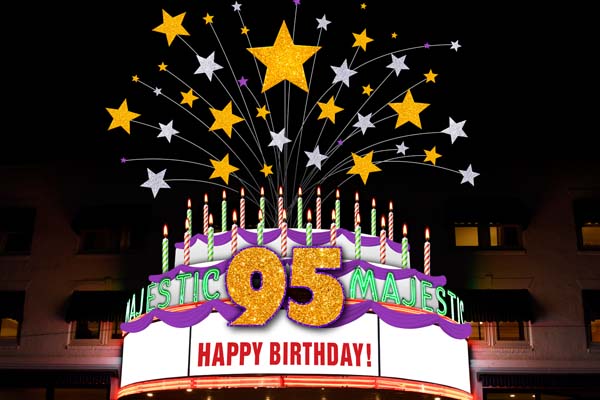 I am delighted, and relieved, to report the Majestic’s 95th Birthday Challenge raised $69,130 toward our $100,000 goal from 119 donors – surpassing our goal of 95 donors. Over the last 17 years, I have been reminded time and time again how loyal and generous the Majestic’s patrons are, and you’ve proved it once again with this crowdfunding campaign. Thank you! I say “relieved” because the Majestic had never done an online campaign before, let alone being closed since March during a pandemic which has upended all of our lives.

I am also very grateful for the J. William Warehime Foundation of Hanover who awarded the Majestic a $100,000 matching grant to start a dedicated theatrical equipment endowment fund. Our production technology must be kept state-of-the-art in order to attract the finest artists from around the world.We are now well on the way to raising the complete $100,000 match by June 30th, which the Warehime Foundation will match dollar for dollar.

I regret we had to cancel our long planned, weekend schedule of “Celebrating 95 Years of Majestic Movies” due to the surge in COVID infections in Adams County. However, I believe with all my heart that when we are able to safely and responsibly re-open, that you will be as excited to return to “the grandest small town theater in America” as we will be to welcome you. And when that happy day arrives, the Majestic’s stars on stage and screen will shine brighter than ever before!